5 Great Reasons to Invest in Power Washing Services for the Exterior of Your Jericho, NY Home

When the homeowners, business owners, and property managers of Nassau County need power washing services, there’s only one company they call: The Clean Team! With years of experience and dozens of satisfied clients, our locally owned and operated Jericho, NY power washing company has the knowledge and experience you can count on to keep your exterior surfaces clean. Decks, patios, siding, roofs, driveways, walkways, and so much more; no job is too big or too small for our team of professionals to handle. Using the most advanced commercial-grade equipment and proven techniques and strategies, we can get rid of the most caked-on dirt, debris, and grime from virtually any exterior surface. For fast, efficient, safe, and affordable power washing services in Nassau County, get in touch with The Clean Team!

5 Benefit of Power Washing Services for Your Jericho, NY Home

When it comes to cleaning your home, dusting, vacuuming, and mopping the interior surfaces are probably the first things that come to mind. While it’s no secret that keeping the interior of your Nassau County house is important, cleaning the exterior is just as crucial.

Constant exposure to dust, dirt, mold, algae, and even the UV rays of the sun can do a serious number on the exterior surfaces of your house. Deep stains, caked-on dirt, green streaks, patches of moss; over time, the effects of such extreme conditions will start to show. Fortunately, there’s a way that you can restore those exterior surfaces. How? With professional power washing services.

Here’s a look at five great reasons why hiring a Jericho, NY power washing professional to clean the exterior surfaces of your Nassau County home is an excellent investment.

When your roof, siding, driveway, walkway, patio, and any other outdoor surface is covered with streaks of green algae, patches of moss and mold, and caked-on dirt and debris, the curb appeal of your Nassau County home is going to suffer. It doesn’t matter how beautiful the architecture is and how meticulously maintained the landscaping may be, if the exterior structures are discolored and stained, your house is going to give the impression that it’s dirty, dingy, and unkempt.

To restore and maintain the appearance of the exterior of your Nassau County house, invest in professional power washing services. A reputable Jericho, NY power washing company will use powerful, safe, and effective tools, equipment, and techniques to remove that caked-on gunk and erase embedded stains on all of those exterior surfaces, giving your curb appeal a major boost.

Believe it or not, professional pressure washing services can help to protect your Nassau County home. Mold, mildew, moss, and algae aren’t just unsightly; they’re living organisms that eat through the surfaces they grow on and can leave serious damage in their wake. Some species of pests, including insects and vermin, feed on and take shelter in dirt, debris, and any organic matter that may be growing on exterior surfaces. As such, if your house is coated with muck, unwanted bugs and critters could be attracted to your home.

With professional power washing services, you can preserve the structural integrity of your house and keep pests at bay. A reputable Jericho, NY power washing company will eliminate caked-on dirt, debris, mold, mildew, moss, and algae, which will not only prevent damage from these organisms but will help to prevent pest infestations, too.

Dirt, dust, mold, moss, and mildew are all known allergens. If the exterior surfaces of your Nassau County house are covered with this debris, anyone who suffers from allergies could experience worsening symptoms. Even if you, your family, and your friends don’t suffer from allergies, exposure to dirt- and grime-covered outdoor surfaces could result in health complications.

By investing in power washing services, you’ll have a healthier home. A reputable Jericho, NY power washing company will remove harmful irritants that may be covering outdoor surfaces so that you and your loved ones will be able to breathe a lot easier – literally! 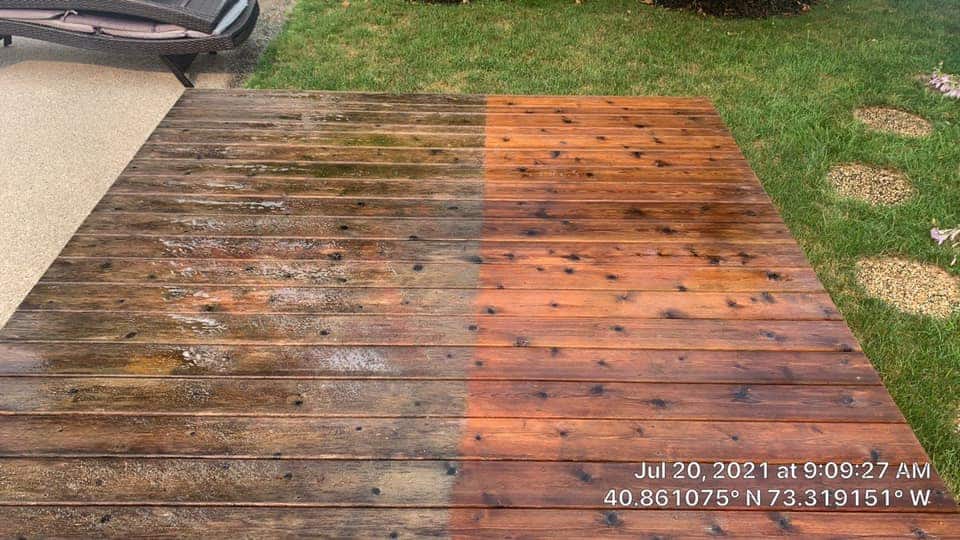 If you’re planning on a home renovation that involves painting or staining, investing in pressure washing services before you get started is definitely a wise idea. Have you ever tried to paint a wall that’s covered in dirt and debris? How about staining a fence that’s covered with grime? The paint or stain won’t go on evenly, and underlying dirt, debris, and grime could end up making the newly applied coat of paint or stain chip, crack, or peel. Paints and stains adhere better to clean surfaces. A Jericho, NY power washing company will remove gunk, giving you a blank slate to work on.

While yes, it’s true that professional power washing services aren’t free, in the long run, investing in these services can actually end up saving you a good bit of money. Because a power washing can eliminate the buildup of organic materials that can eat through vinyl siding, cedar shakes, asphalt shingles, and even masonry work, and since it can help to keep pests that could cause even further damage at bay, power washing services can preserve the structural integrity of your home, prevent serious damages, and help you avoid costly repairs. Plus, a reputable Jericho, NY power washing company will charge fair and affordable prices.

The above are just some of the benefits that power washing services provide. To take full advantage of these benefits – and more – get in touch with the leading Jericho, NY power washing company: The Clean Team. With years of experience and a proven track record of excellence, you can count on our fully licensed and insured professionals to enhance the curb appeal, preserve the structural integrity, and improve the health of your Nassau County home. To learn more about our power washing services, to request a free price quote, or to schedule an appointment, submit a contact form right through our website or give us a call at 631-202-7303.

Some information about Jericho, NY

Jericho is a hamlet and census-designated place (CDP) in Nassau County, New York, United States, on the North Shore of Long Island, approximately 29 miles (47 km) east of Midtown Manhattan. Its population was 13,567 as of the U.S. 2010 Census.

Located mainly in the Town of Oyster Bay with a small part in the Town of Hempstead, Jericho was part of the Robert Williams Plantation in 1648. The English families who settled in Jericho were, or soon became, Quakers, members of the Society of Friends. Many fled from persecution in England and in the New England Colonies. They sought a peaceful existence as farmers. The name of the area was changed in 1692 from Lusum to Jericho after the town in the Middle East near the Jordan River mentioned in the Bible as part of the Promised Land.

Elias Hicks married Jemima Seaman in 1771 and moved to her family’s farm in Jericho, where he soon became a noted preacher of Quaker doctrine. All the Quakers suffered during the British occupation of Long Island in the Revolutionary War. The practice was to quarter troops in homes of residents, who had to provide room and board for them. The Quakers continued to protest the entire concept of war itself. After the war, peace returned to Jericho, and the neat farms and businesses began to prosper. A Friends Meeting house was built in 1788 in Jericho that is still used in the 21st century. A Quaker school was built in 1793, the Charity Society of Jericho and Westbury in 1794, and slavery was abolished in 1817, with Hicks’ help.

A post office was established in 1802, a cider mill in the mid-19th century, the first public elementary school in 1905, known as the Cedar Swamp School. Improvements to infrastructure were made with the founding of the Jericho Water District in 1923. As the population increased, a new elementary school was built in 1953 (Robert Seaman School), and a Volunteer Fire Department established in 1938. The population kept increasing until the last elementary schools in Jericho were built, the George A. Jackson Elementary School in 1957, the now closed Robert Williams School in 1961 and the Cantiague School in 1963. When the Village of Muttontown was incorporated, the cider mill was within the village limits. Because most Gold Coast villages wanted to remain business free areas, many do not have their own post offices or ZIP Codes. Therefore, Jericho Post Office which serves this area of Muttontown is displayed as the official USPS mailing address and leads to the misconception that the cider mill is in Jericho.

Directions from Jericho, NY to The Clean Team