Top Signs You Should Start Looking for Power Washing Companies Near You for Your Wantagh, NY Home

Is the siding of your home dripping with green scum? Is your business parking lot covered with set-in stains, gum, or even graffiti? Whatever the case may be, if the exterior surfaces of your property are looking lackluster and just plain gross, if you’re looking for power washing companies near you, get in touch with The Clean Team. As a locally owned and operated, fully licensed and insured Wantagh, NY power washing company, we’ve been restoring and preserving the outdoor surfaces of Nassau County homes, businesses, and rental communities for years. Using the most advanced commercial-grade equipment and proven techniques and strategies, our team of professionally trained technicians can remove even the most caked-on dirt, debris, grime, and scum from all types of surfaces. For the top-quality, safe, efficient, and affordable Wantagh, NY power washing services, instead of searching online for “power washing companies near me”, get in touch with The Clean Team. 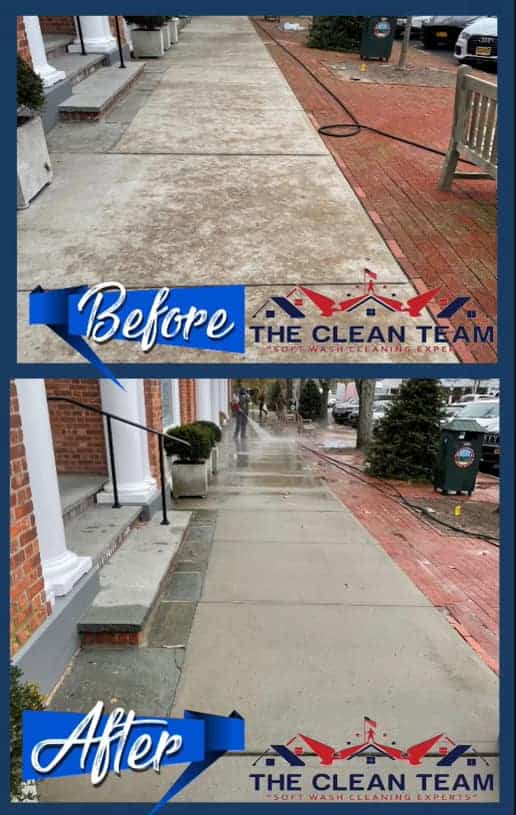 Signs You Should Schedule an Appointment with a Wantagh, NY Power Washing Professional

Your home is your castle, and you take great pride in its appearance; not only the interior, but the exterior, as well. Curb appeal is so important, as it not only affects the overall look and feel of your Nassau County house, but it also has a direct impact on the value of your property. A professional power washing company can help to restore and maintain the curb appeal of your house, as they can remove caked-on dirt, debris, and grime from outdoor surfaces. But how do you know when you should schedule an appointment with a Wantagh, NY power washing company? If you notice any of the following signs, it’s time to consider looking for power washing companies near you.

Take a look at your roof. Do you see any green spots growing on the shingles? If so, you’ll want to call a Wantagh, NY power washing professional as soon as possible, as those spots you’re seeing are probably moss, mold, and/or mildew.

If your driveways and walkways are covered with built-up dirt, caked-on debris, and oil stains will negatively impact the visual appeal of your Nassau County house. Even more concerning, they can become slick underfoot, and can potentially turn these high-traffic areas into a serious hazard. To restore the look and safety of these outdoor structures, get in touch with a Wantagh, NY power washing professional as soon as you notice your driveway and/or walkways are covered with dirt and stains.

If utility expenses seem to be much higher than usual and you aren’t using your heating or air conditioning any more than usual, having a Wantagh, NY power washing company clean the roof and siding might help to reduce the expense – and improve the comfort of your Nassau County home.

If you’re experiencing any of the above-mentioned issues – or any other outdoor surface is looking dirty or dingy – you should definitely consider getting in touch with a professional power washer. When you’re searching “power washing companies near me”, make sure to include The Clean Team on your list! With years of experience and dozens of satisfied customers, our Wantagh, NY power washing company has the knowledge and experience that you can rely on to refresh and restore your Nassau County house. To learn more about our services or to request a free consultation, give us a call at 631-202-7303 today!

Some information about Wantagh, NY

Wantagh is a hamlet and census-designated place (CDP) in the Town of Hempstead in Nassau County, on Long Island, New York, United States. The population was 18,871 at the time of the 2010 census.

The Wantagh area was inhabited by the Merokee (or Merikoke) tribe of the Metoac Indians prior to the first wave of European settlement in the mid-17th century. The Merokee were part of the greater Montauk tribe that loosely ruled Long Island’s Native Americans. Wantagh was the sachem (chief) of the Merokee tribe in 1647, and was later the grand sachem of the Montauk tribe from 1651 to 1658. The Dutch settlers came east from their New Amsterdam colony, and English settlers came south from Connecticut and Massachusetts settlements. When the English and Dutch settled their competing claims to Long Island in the 1650 treaty conducted in Hartford, the Dutch partition included all lands west of Oyster Bay and thus the Wantagh area. Long Island then was ceded to the Duke of York in 1663-64, but then fell back into Dutch hands after the Dutch regained New York in 1673. The Treaty of Westminster in 1674 settled the land claims once and for all, incorporating Long Island into the now-British colony of New York.

Early settler accounts refer to Wantagh as “Jerusalem”, although earlier accounts refer to the area as “Wantagh”. The creek running north-south through Wantagh, and which has been covered up in many places but is still visible between the Wantagh Parkway and the housing developments west of Wantagh Avenue, was originally the Jerusalem River. The original post office was built in 1837, for Jerusalem, but mail service from Brooklyn began around 1780. The town’s first school was established in 1790. At some time around the 1880s, Jerusalem was renamed Ridgewood, and the town’s original LIRR station was named “Ridgewood Station”. Later, Ridgewood was renamed Wantagh to avoid confusion with another town in New York State with the same name.

George Washington rode through Jerusalem on April 21, 1790, as part of his 5-day tour of Long Island. The Daughters of the American Revolution have placed a plaque on Hempstead Turnpike to commemorate Washington’s travels, which took him from Hempstead on Jerusalem Road (now North Jerusalem Road) to Jerusalem, on to Merrick Road. He then went on to head east, then circle back west on the north shore. During the Revolutionary War, British ships traveled up Jones inlet and came ashore to raid Jerusalem farms.