Are you a Suffolk County homeowner, business owner, or property manager? Are you looking for a company that power washes roofs? If you answered “yes” to either of those questions, then you’ve come to the right place! The Clean Team is a leading Islip, NY roof cleaning company that has been cleaning the residential and commercial roofs of Suffolk County for years. Asphalt shingles, clay tile, and metal roofing systems; no matter what kind of roof you have and how dirty and dingy it may be, you can count on our professionally trained technicians to restore its appearance and preserve its structural integrity. When you’re looking for a reliable company that power washes roofs, get in touch with The Clean Team!

Signs You Should Schedule an Appointment with a Islip, NY Roof Cleaning Company

Because it’s so important, in order to ensure that your roof remains in tip-top condition, it has to be properly maintained. One of the best ways to maintain the structure is by investing in the services of a company power washes roofs. A Islip, NY roof cleaning company will remove built-up dirt, debris, mold, mildew, algae, moss, lichen, and other organic materials, which will not only improve its appearance but will preserve its structural integrity. But how do you know when you should have your roof cleaned? The following are telltale signs that it’s time to schedule an appointment with a Islip, NY roof cleaning professional. 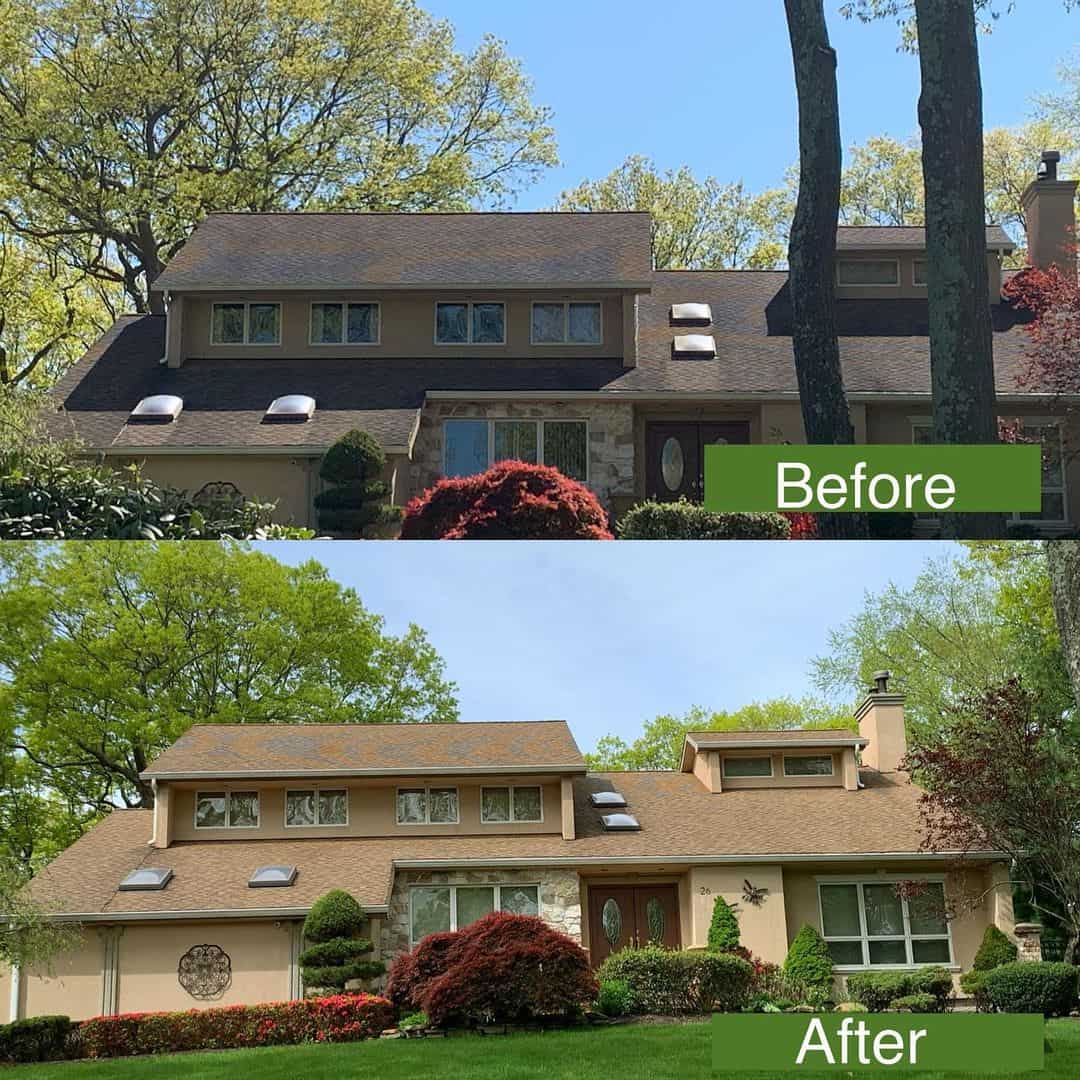 When you look up at your roof, do you see patches of green anywhere? If so, that’s a sign that you’re definitely going to want to call a Islip, NY roof cleaning company. The green that you’re seeing could be moss, mold, algae, lichen, or mildew. These organic materials thrive in warm, moist environments, making a roof the perfect breeding ground. Not only do they detract from the visual appeal of the exterior of your Suffolk County house, but if left unchecked, they can cause serious damage. Moss, mildew, mold, algae, and lichen are all living organisms, and they feed on the organic materials they grow on, such as asphalt shingles, clay tiles, and even the underlying decking. In other words, these organisms can leave serious damage in their wake.

If your roof appears discolored and lackluster, schedule an appointment with a professional that power washes roofs. A reputable Islip, NY roof cleaning company will eliminate the built-up, caked-on debris, not only improving its appearance but also reducing the risk of structural damage, as well as pest infestations.

If you’re experiencing any of the above-mentioned issues, or any other problem, scheduling an appointment with a company that power washes roofs as soon as possible is highly recommended. For the best roof cleaning services in Suffolk County, contact The Clean Team. As a leading Islip, NY roof cleaning contractor, you can count on us to eliminate all kinds of dirt and debris, restore the curb appeal of your home, and prevent the risk of damage. For more information, to schedule a free consultation, or to request a free price quote, call 631-202-7303 today!

Some information about Islip, NY

Islip is one of ten towns in Suffolk County, New York. Located on the south shore of Long Island, the town population was 335,543 at the 2010 census, it is the fourth most populous City or Town in the state.

Matthias Nicoll relocated to New York from Islip, Northamptonshire, England, in 1664.His son, William Nicoll, became a royal patentee of the east end of what is now the Town of Islip, and his domain reached from East Islip to Bayport and included Sayville, West Sayville, Oakdale, Great River, Islip Terrace, Central Islip, Hauppauge, Holbrook, Bohemia, Brentwood, Holtsville and a portion of Ronkonkoma. All of this land was bought from Winne-quaheagh, Sachem (chief) of Connetquot in 1683. The yearly fee paid to Governor Thomas Dongan of New York was five bushels of quality winter wheat or 25 shillings. Other early land patentees were Andrew Gibb (Islip Hamlet), John Mowbray (Bay Shore, originally Awixa), Stephan Van Cortlandt (Sagtikos Manor), and Thomas Willets (West Islip).

By 1710, the colonial government passed an act to enable the precinct of Islip in the County of Suffolk to elect two assessors, a collector, a constable and a supervisor. The people had a voice. Growth, however, remained at a standstill until the Revolutionary War ended when, in the 17 years that followed, there was more progress than in the 50 years preceding. This activity was partly due to the impact of American shipping.

By 1825, it was necessary to install a Fire Island light across the Great South Bay and regular ferry service between Bay Shore and Fire Island began in 1862. In 1867[?] the Long Island Rail Road came to Islip and the first depot was built. People were discovering Islip and the tourist trade soon took hold.

Directions from Islip, NY to The Clean Team